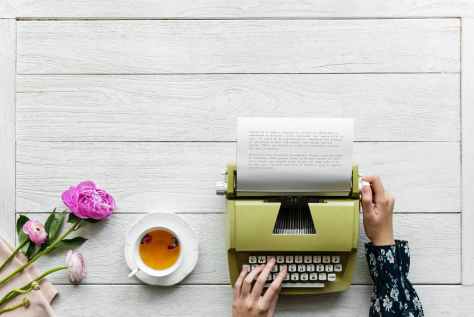 Debbie woke up, the sun was cutting through the gaps in the curtain, showing the promise of a beautiful sunny day.  She squinted her eyes as she looked at her alarm clock to see what the time was: half past nine, she hadn’t slept that long in for ages. Debbie rolled over and saw at once that his side of the bed was empty. She wasn’t surprised Sam was working on a Sunday again, he had to stocktake and because he was so busy at work, this was the only time he could do it.

She rolled back over to face her bedside cabinet, grabbed her glasses and automatically reached for her mobile phone. Debbie glanced at the screen, some Whatsapp messages from her groups of friends that she had spent last night with, some Facebook notifications and what was this? An email from the Lottery:

“We have some good news about your ticket.”

Debbie immediately sat up when she read this, “Wow, it’s about time, I’ve been doing it for years and only won the odd £10 here and there,” she thought as she excitedly logged into her account, “I’m pretty sure it will be about the same amount this time as well.”

As she nervously waited for her account to update, she wondered what it would be like to be a millionaire, not having to worry about money every again… Her total funds in her account had definitely updated, it was now £1 million!! Debbie couldn’t believe her eyes, she had won a million pounds, that kind of thing never happened to her, she had never won anything, not even in the local church raffle. She updated the page again, feeling sure it would show her usual, £0.05 credit, but no, it still showed the million, well, one million and five pence to be exact.

Debbie exited the account and called up Sam’s phone number, she should tell him as soon as possible, he’d be so excited, they could give up work. As she pressed to call him, she suddenly thought better of it, “No, I think news like this should be given in person,” and she jumped out of bed, pulled on her jeans and a jumper, pulled a comb through her hair, grabbed her car keys and practically ran out of the house.

Driving to the printing warehouse where Sam worked as a General Manager, Debbie’s mind was full of what the future now held for them. They wouldn’t go mad, perhaps a nice holiday, a bigger house, they could both have nice cars and perhaps leave their jobs, or they could go part time.

Even though the journey usually took about 20 minutes, today the traffic was horrendous and it seemed as though every traffic light on her route was waiting for her to approach it and then turn red at the last second. She couldn’t wait to get there and share the good news.

When Debbie arrived, she went to the back door, it was normally open for the cigarette smokers who, on a normal work day, congregated there to smoke, chat, gossip, flirt or do whatever else smokers do whilst smoking.  But today, apart from the stale stench of tobacco it was deserted and Debbie walked through the door, from the bright sunshine into the comparative darkness of the corridor.

Her eyes took a few seconds to adjust to the darkness and when they did, perhaps it would have been better if they had stayed blinded as what Debbie saw made her whole body freeze and her mouth drop open. She could see into Sam’s office from where she stood and there he was, his arms around Sandra, his assistant manager, embracing her, his hands around her waist, her head in his chest, they were lost in each other. Debbie felt like she was intruding on a very personal moment and wasn’t sure what to do for the best. So, she quietly walked back up the corridor, back out into the sunshine.

Once outside, Debbie took a deep breath, she had come to give Sam the most amazing news, life changing news and what she had seen had now changed her life, forever.

One thought on “Life is a Lottery – Part One”

We were due to go to London for High Tea at The Savoy Hotel, but then we had the sad passing of HM The Queen, so we changed our plans and cancelled the tea and instead, went to London to pay our respects at the Procession of HM Queen's Coffin to Westminster Hall....
😂😂 hope she doesn’t miss her stop!!
Have a good one!
My little book corner - the bookcase is full of Enid Blyton books 📚
😂😄😃 At least it’s a good description!!
Join 787 other followers

We were due to go to London for High Tea at The Savoy Hotel, but then we had the sad passing of HM The Queen, so we changed our plans and cancelled the tea and instead, went to London to pay our respects at the Procession of HM Queen's Coffin to Westminster Hall....
😂😂 hope she doesn’t miss her stop!!
Have a good one!
My little book corner - the bookcase is full of Enid Blyton books 📚
😂😄😃 At least it’s a good description!!