This blog contains spoilers of who has left, who won star baker, who received a Hollywood Handshake and what necklace Prue was wearing…

Before each episode begins, Alexa is asked, “Alexa, tell me a baking joke,” and Alexa replies, “I just entered a baking competition – the final was a piece of cake.”

This always makes me smile because I used to have a small cake business called A Piece Of Cake and I would make celebration cakes. I stopped about two years ago, very occasionally making cakes for friends. Last year I was asked to make a wedding cake for one of my daughter’s best friends and this is happening in the next couple of days. Look out for my blog of how I got on…

Anway, this week was Dessert Week – not Desert as Noel got confused with… I did notice that Henry was wearing a spiderweb brooch and Michael had a bat pin, a tribute to Helena I think!

This week our Magnificent Seven (be prepared for more of these analogies over the coming weeks, Fab Four, Famous Five…) had to bake a layered meringue cake. As Paul and Prue went round the contestants Paul mentioned timing to Priya, does she have a problem with that? I hadn’t noticed!

Priya’s signature bake is criticised by Prue for being a horrible colour and an overbaked meringue, Henry’s was described as messy, Michael’s had too much chocolate, (not sure that could ever be true!) and Rosie’s chocolate was too thick (as was her ganache last week). Steph’s was described as neat and professional, but maybe too many nuts and David’s looked like a painting but wasn’t as tasty as it looked and Alice’s was charming but no big flavour.  So all in all, not a triumphant signature bake for anyone.

Prue sets the Technical Challenge which is six verrines and we are told these are a layered dessert in a glass.  Perhaps the Knickerbockerglory is our English alternative to that?

This week we find out that it is Michael’s birthday (26), how cruel would it be to send him home on his birthday? Henry has started swearing a lot and the Bake Off guys have, “The least laddy’s lad club where we discuss gelatine.”

When the bakers carry their verrines to the judging table, it’s either in slow motion or this is the slowest walk ever!

The baking equivalent of an egg and spoon race. #GBBO pic.twitter.com/bRS67eJMQ3

A Celebratory Bombe Dessert is this week’s Showstopper, “I feel like we’re saying a lot of bombes,” Sandi remarked, “Bom-diddly-bom-bom-bom-bom.”

Timing is very much a factor in this challenge, they need to make sure that the bombe has set but also leave themselves enough time for decoration.  Alice has a nightmare trying to get her bombe out of the tin, she is panicking, but eventually it comes out and looks great.

Steph’s chocolate bombe is described by Paul as the best thing he has eaten for a long time. Rosie’s mousse is not smooth and it looks clumsy, David’s is pretty, elegant, Alice’s is beautiful with good layers, Priya’s is elegant and Henry’s is described as disappointing.

My favourite comparison was Paul’s when he judged Michael’s bombe, “It looks like it’s come from a 1970’s sweet trolley.” And it was also compared to the Queen Mother’s hat.

Which leads me nicely to the best Tweet from Amy Van Gar: 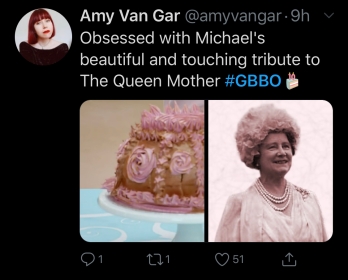 Steph is crowned Star Baker for a third time, is this a record, I’m not sure? And Priya has finally succumed to the fate of going home.

Next week is Festival Week – another new week, so I’m not quite sure what to expect!

We were due to go to London for High Tea at The Savoy Hotel, but then we had the sad passing of HM The Queen, so we changed our plans and cancelled the tea and instead, went to London to pay our respects at the Procession of HM Queen's Coffin to Westminster Hall....
😂😂 hope she doesn’t miss her stop!!
Have a good one!
My little book corner - the bookcase is full of Enid Blyton books 📚
😂😄😃 At least it’s a good description!!
Join 787 other followers

We were due to go to London for High Tea at The Savoy Hotel, but then we had the sad passing of HM The Queen, so we changed our plans and cancelled the tea and instead, went to London to pay our respects at the Procession of HM Queen's Coffin to Westminster Hall....
😂😂 hope she doesn’t miss her stop!!
Have a good one!
My little book corner - the bookcase is full of Enid Blyton books 📚
😂😄😃 At least it’s a good description!!